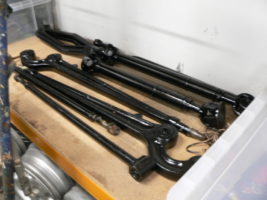 While we had the chassis on the Ramp, we took advantage of the leverage and began removing the axles, suspension and everything else attached to the chassis.

This would all be taken away and either replaced for new parts, or cleaned up/treated and repainted to keep some originality to the car while maintaining a fresh new look.

An issue we had with working with a car this old, was the rust that had taken most of the bolts that we had to do. This lead to a lot of broken bolts and took us a long time to resolve, eventually we had the car in pieces and we decided that we would replace all of the bolts that came off of the car, no small feat.